Surprised that there were no South African gardening books or magazines in the 1950's, Una started writing gardening articles for the Farmers Weekly, being paid two shillings and sixpence (about R50 today) per article.

Pregnant with her third child and, at 38, Una had to slow down from her high-speed way of doing things. She decided to use this enforced less active time to write a full-length gardening reference book.

Naturally the book was to be illustrated in pen and ink line drawings and, equally naturally, Una decided that they should be done by her 14 year old eldest son who wanted to be an artist (he is now an architect). They were, and Una gave this book, ‘Gardening in Southern Africa’ (1953) the following dedication: “This book is for ANTHONY who prepared the line illustrations, and without whose help it would never have seen the light of day”. 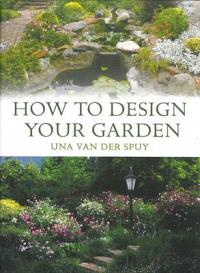 Gardening in Southern Africa went through a number of reprints, and revised editions were published in 1981 and 1983. It has been the standard reference for gardeners throughout Southern Africa for over 50 years.

Perhaps one of the best accolades for this book was from her second son, Peter, in the 1970s. He was preparing a new lawn at his home in Australia and, needing guidance, took from the bookshelf a paper-covered book labelled “Gardening” and went to the index to find ‘lawns’. What he then read about lawn making struck him as being so well written and to the point that he asked his wife where she had obtained this wonderful book. She replied “from your mother – she wrote it”!

Each of these books was full-format and well-illustrated with photographs taken by Una, who, for the purpose, studied photography and film processing techniques at Stellenbosch University under the guidance of the renowned Alice Mertens, who’s photographic books are classics of the time.

After more than 20 years of writing and running Old Nectar Nurseries (roses and shrubs), Una expanded her activities by organizing and leading her well-remembered gardening tours of England, Ireland, France, Germany, Italy, Holland, the US and Canada. She also journeyed on her own or with her husband, Kennie, to visit gardens in Scandinavia, Spain, Portugal, Turkey, Greece, China, Japan, Australia, New Zealand, Thailand, India, Brazil and the Argentine and Peru in her quest for new gardens and gardening ideas. She also developed the Stellenbosch School of Horticulture and Garden Design and for a number of years worked on commissions to plan private and public gardens between Cape Town and Nairobi – numerous towns and cities in Southern Africa have private and public gardens designed by Una in the 1960’s and 70’s.

In 1992 Una damaged her spine from a fall while out walking in the dawn hours. This led to her having to restrict her physical activities for over a year and, to compensate, she entered the world of digital photography and soon had a collection of some thousands of photographs of gardens and related subjects, whereupon she decided to put them to good use – “I will just have to write another book, I suppose”. The result was her trilogy of books written between the age of 91 and 99. Old Nectar, a Garden for all Seasons (2004 when Una was 92), How to Design your Garden (2007) and My Favourite Plants for the Garden (completed just before her death four days short of her hundredth Birthday in 2012 and published posthumously).

Not counting Afrikaans editions and reprints, over 56 years between 1953 and 2009 Una wrote fourteen books on gardening: Una remains well known for her contribution to the world of gardening throughout Southern Africa. The gardens of Old Nectar are unquestionably her landmark gift to the heritage of South African gardening.

How to Design Your Garden
Publisher - Don Nelson
Year - 1992

Old Nectar: A Garden for All Seasons
Publisher - Jacana
Year - 2010